Many years ago I was working with a group of new leaders who had their direct line leader present in the 3 day leadership workshop.

We were talking about mindset and how you overcome fear and step up to the mark to lead your people.  A lot of our discussion was about self-belief and confidence to step into this new role and lead people who have been your “mates”.

During some of the discussions, the direct line leader kept saying, “But Ingrid, you need to be realistic, some of those activities are impossible”.  It became very irritating to me. Whilst we were working hard to empower and instill confidence in these new leaders and ensure that they were fully equipped with the right tools and techniques to do their role well, their very own leader kept putting a dampner on our message.

After 2 days, I couldn’t take it anymore.  I called him over (subtly) during a break.  I asked him whether he was aware of the many times he used the word “impossible”.  Of course, he was not.

I pointed out that there are very many ways to look at things and the more he played the record of things being “impossible” they would certainly remain that, as he was stamping out his creativity to see things from a different perspective. 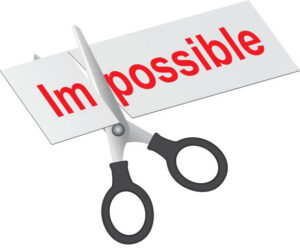 I then asked him what the impact would be if we wrote the word slightly differently by adding a space and an apostrophe, like this:

He was blown away to the point of tears.  His mindset was completely “awakened” and he asked that I did not share with this team how emotionally upset he had become as a result of this realization.

The problem is when we repeat anything regularly, we are the one person that hears it over and over and over again resulting in you starting to believe what you are telling yourself!

Time to POWER UP and switch on your positivity.

Inspirational Thoughts is a quick read intended to inspire, educate and enable you to progress to live a life of positivity, purpose and passion. The focus includes handling change, personal growth, wellbeing, and creating a future you choose. You will also be informed of any upcoming event updates and offers.

As a thank you for subscribing, I will send you my Top 10 Tips for Living a Fabulous Life.